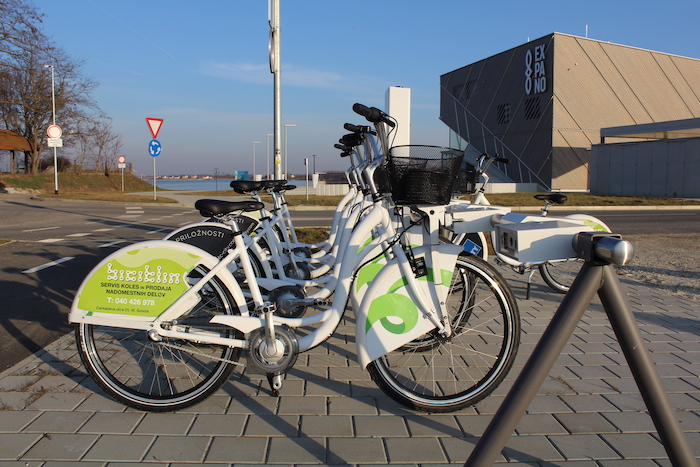 In October 2018, the SOBOŠKI BICIKLIN bicycle rental system was upgraded. Three new rental stations were set up, 15 additional bicycles were supplied, of which 6 were e-bicycles. From now on, the rental system will be much more user-friendly, and the website www.soboskibiciklin.si has also been renewed.

As part of the activities to upgrade the automated bicycle rental system SOBOŠKI BICIKLIN, three new rental stations were set up next to two existing stations (at BTC Murska Sobota and Trg zmage), namely next to the EXPANO pavilion at Soboško Lake, at Rakičan manor and in Krog ob sports and recreation facility. Each of the stations is equipped with a terminal with LCD screen and a frame with ten locking points, which are also charging stations for electric bicycles. As part of the system upgrade, 15 new bicycles were purchased, of which 6 were electric bicycles. Thus, from now on, 25 bicycles will be available in the system. In addition to additional stations and new bicycles, the rental or registration system has also been upgraded to a system that is now significantly more user-friendly, as it runs directly next to the stations, via a computer terminal.

In addition to additional stations, bicycles and the upgrade of the rental system, the website www.soboskibiciklin.si was also upgraded.

Rental is possible by registering via the website – RENTAL INSTRUCTIONS.

The amount of investment in the upgrade with the installation of three new stations, the purchase of bicycles and the service of maintenance and upgrade of the software part of the system amounted to EUR 63,524.79 (including VAT).

The upgrade was carried out within the IronCurtainCycling project, which is implemented by the Institute for Culture, Tourism and Sport within the Interreg V-A Slovenia-Hungary Cooperation Program in the period 2014-2020 and is partly funded by the European Union, the European Regional Development Fund.